A Pulitzer Prize-winning journalist who writes frequently about environmental science, Dan Fagin is also a science journalism professor at New York University. His bestselling book, Toms River: A Story of Science and Salvation,was awarded the 2014 Pulitzer for General Nonfiction, as well as the New York Public Library’s Helen Bernstein Book Award for Excellence in Journalism, the National Academies Science Book Award and the Society of Environmental Journalists’ Rachel Carson Environment Book Award, among other honors. A rave review in the New York Times described Toms River as “great journalism” and “a new classic of science reporting.” Dan’s recent publications include The New York Times, Scientific American, The Washington Post, Nature and Slate. His new book project is about monarch butterflies and the future of biodiversity in the Anthropocene.

Before joining the NYU faculty in 2005, Dan was the environmental writer at Newsday for 15 years, during which time he was twice a principal member of reporting teams that were Pulitzer finalists. He has also won both of the best-known science journalism prizes in the United States: the Science Journalism Award of the American Association for the Advancement of Science, and the Science in Society Award of the National Association of Science Writers.

At NYU, Dan is a Professor of Journalism (full) at the Arthur L. Carter Journalism Institute and the director of the masters-level Science, Health and Environmental Reporting Program (SHERP), one of the oldest and best-regarded science journalism training programs in the world, with more than 400 graduates since its founding in 1982. He is also the founder and director of the Science Communication Workshops at NYU, four-week short courses in which more than 800 science Ph.D. students, post-docs, medical students and professors at NYU have learned the basics of communicating scientific research effectively to the lay public. 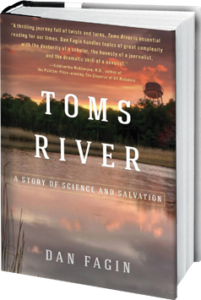 Toms River: A Story of Science and Salvation was published in 2013 by the Bantam Books division of Random House. The paperback edition, with a new afterword from Dan, was published by Island Press in 2015. Two Chinese language editions were also published in 2015, by the Shanghai Translation Publishing House (for China) and the Commonwealth Publishing Group (for Taiwan and overseas Chinese). A New York Times bestseller, Toms River has been described by reviewers as “a narrative of such irresistible momentum” (The New York Times), “a gripping environmental thriller” (Kirkus Reviews, starred review), “a crisp, hard-nosed probe into corporate arrogance and the power of public resistance” (Publishers Weekly), “required environmental reading” (The Philadelphia Inquirer), “a triumph” (Nature), “an epic tale of our chemical age” (Carl Zimmer), a “powerful and important book” (Elizabeth Kolbert), and “essential reading for our times” (Siddhartha Mukherjee). NPR and Kirkus both named Toms River one of their best books of 2013, and two major Chinese language newspapers, the Beijing News and the Taiwan-based China Times, named it a Book of the Year for 2015.

Dan is also the co-author of Toxic Deception (2002, Common Courage Press), which in its original hardcover edition was a finalist for the Investigative Reporters and Editors book prize in 1997. The New York Times called Toxic Deception “the story of the triumph of a special interest over the public interest.”

A native of Oklahoma City, Dan attended Dartmouth College, where he was the editor-in-chief and president of the college newspaper. He spent two years at the Sarasota Herald-Tribune before joining Newsday, where he covered local and state politics and then assumed the environment beat. After 15 years covering environmental issues for Newsday, he joined the NYU faculty in 2005. He has been a Templeton-Cambridge Fellow in Science and Religion at the University of Cambridge and has also had fellowships at the Marine Biological Laboratory in Woods Hole, Massachusetts, and the Institute of Arctic Biology in Toolik Lake, Alaska. Dan is a former president and a proud member of the 1,200-member Society of Environmental Journalists, the oldest and largest association of journalists dedicated to improving the quality, accuracy and visibility of environmental coverage. He lives on Long Island with his wife, the legal journalist Alison Frankel. They have two grown daughters and a surfeit of cats. Dan is represented by Jane Dystel of Dystel, Goderich & Bourret LLC.